With the average person seeing between 4,000 to 10,000 ads a day, competition for your attention is an always-on battle. Every brand, regardless of its industry, is fighting to stay relevant. But one of the challenges in doing that is being newsworthy when you don’t have any news worth sharing.

Some brands, such as Apple and Taco Bell, rely on innovation — constantly churning out new products to stay top-of-mind. (Yes, Taco Bell is an innovator.) Others, such as Coca-Cola and John Lewis, rely more on their legacy and creativity.

And some are seasonal. Sports is an example of this — a business that isn’t making a product or offering a service year-round. As we approach the NFL offseason, it got me thinking about what the league does to keep fans interested in, and talking about, football in spring and summer. Sure they keep the calendar full with events like the Combine, the Draft and training camps, but the challenge remains: How do you market football when there’s no football?

What makes a professional sport different from other companies is that each team is a public organization inside an organization — each with its own operating body, management, budgets and marketing. The NFL isn’t just a league, it’s a parent company. The 32 semi-autonomous franchises all compete to win games, but they also compete for fans and revenue. Just as there are winners and losers on the field, surely there are winners and losers when it comes to marketing, right?

I had to find out. Luckily, I have a Pro Bowl-worthy roster of marketing pros on my team. Method Marketing is made up of some of the best copywriters, designers, social media experts and research practitioners I know, and we were all eager to tackle (sorry) this problem. Here is a quantitative ranking of every NFL team’s cumulative marketing efforts.

To make things fair, we had to look at this objectively. For example, even though I’ve been a 49ers fan (bang, bang, Niner gang) since I was 12, I couldn’t unfairly give them a higher rating for being more “likeable” than, say, the Raiders. We had to make sure our audit relied on data as much as possible.

To come up with that data, we looked at each team’s social hygiene, their visual branding and their web content. To turn that analysis into an aggregate score, our three criteria were weighted based on what we deemed impactful and measurable, e.g., we scored engagement as more valuable than reach. Each branding element was weighted as seen below, resulting in a possible maximum score of 65 points.

We looked at each team’s website and scored it on copywriting elements (style, grammar, punctuation, etc.), engageability and overall user experience. 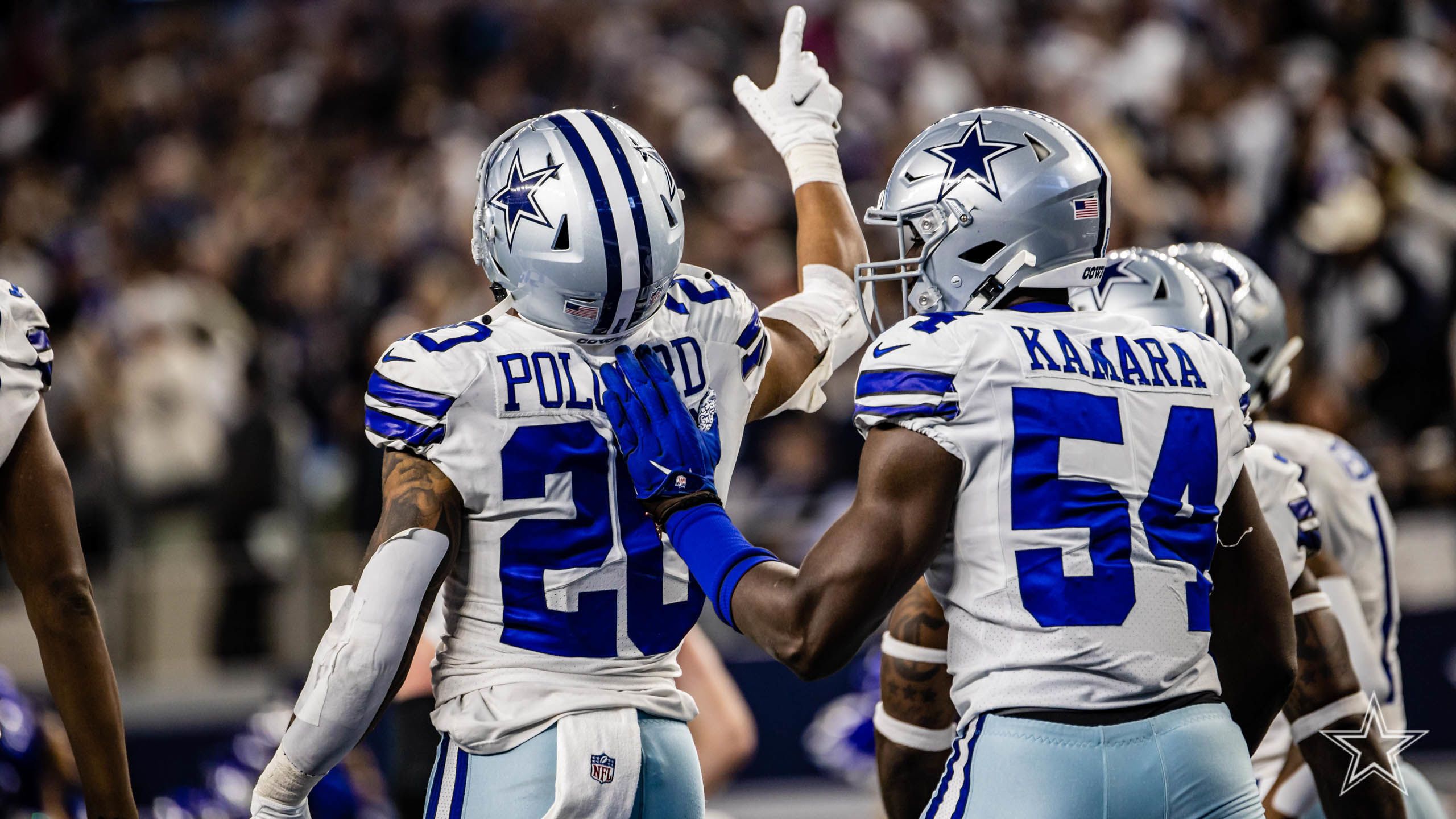 The Dallas Cowboys (which was painfully predictable) ranked as the most effective marketing apparatus in the National Football League. “America’s Team” scored highest on the most key metrics, barely edging out the second-place Steelers. Last on the list was the Falcons. Here are all the numbers: 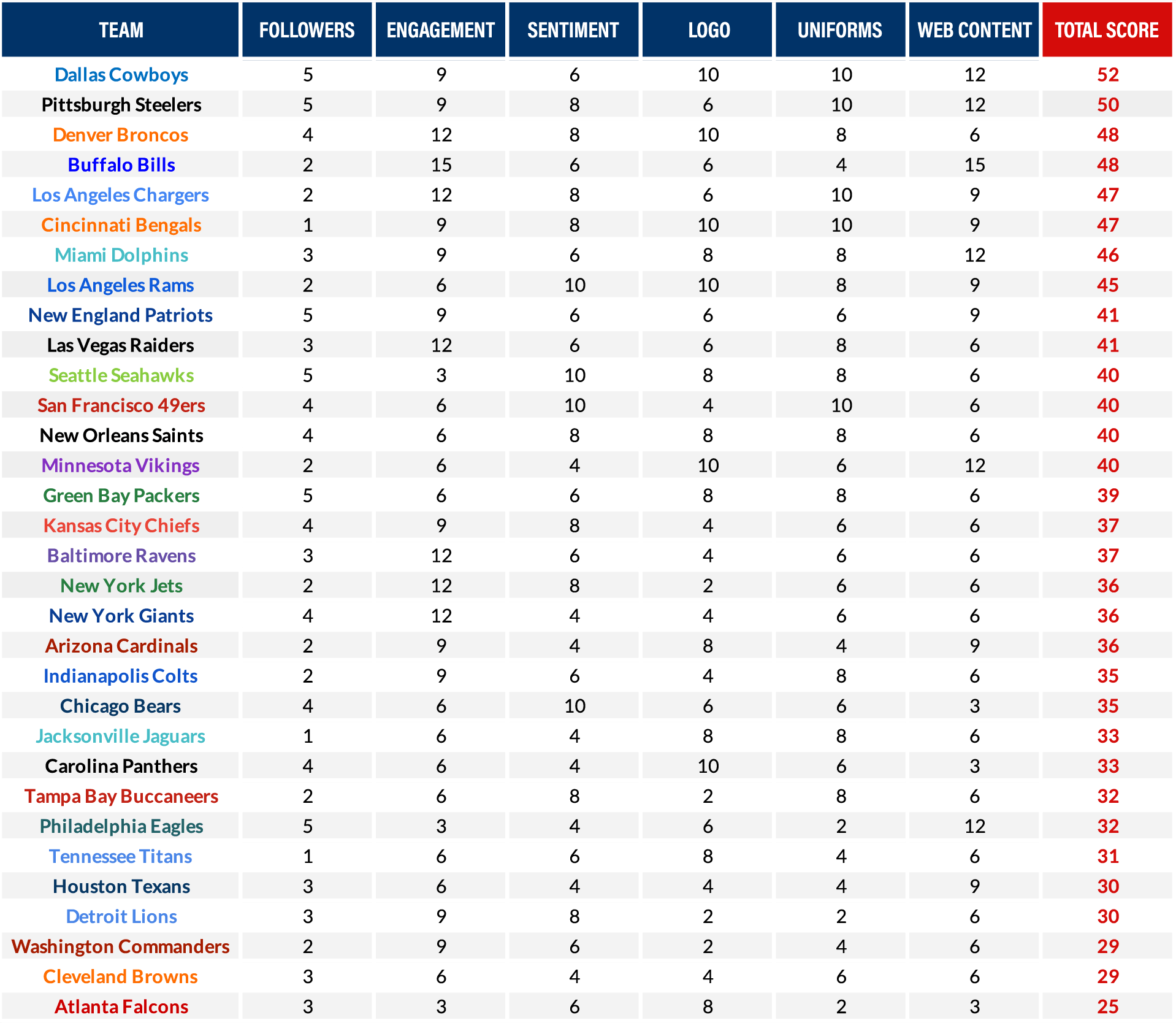 THE BEST AND WORST

Valuation made little difference
We compared each team’s overall marketing score with its enterprise value. Right on cue, the Cowboys are the most valuable franchise at a $6.5B valuation. Bottom feeders for both valuation and marketing score were the Browns and Lions, at worths of $2.6B and $2.4B, respectively. Interestingly, the two least-valuable teams in the league were branding superstars: The Bengals ($2.275B) and Bills ($2.27B) both placed in the top six on our marketing matrix. And the franchise with the worst value-to-marketing ratio is the Washington Commanders — more on them later. 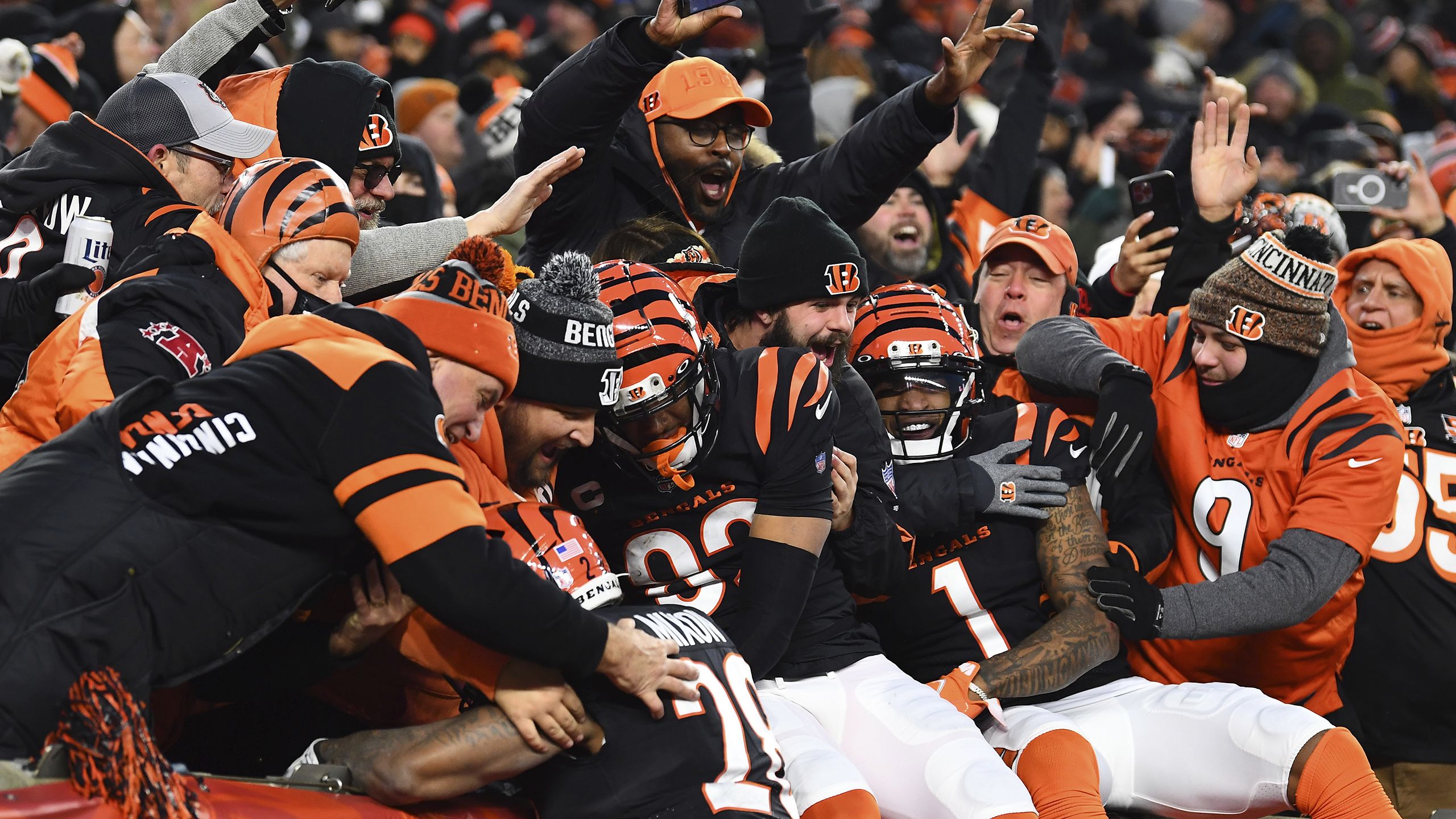 Winning games didn’t matter
We then got curious about comparing each team’s marketing score with its record from the 2021 regular season. Again, there was no significant correlation. The Broncos ranked 3rd best in marketing but had the 22nd-worst record last year. On the other end of the scale, the Titans ranked 37th in marketing but were tied for the 3rd-best record.

Detroit, What?
Despite finishing 29th overall, the Lions came in 5th place on TikTok. Their digital team is killing it. Did you see the brilliant response they had to @emilyzugay? They may not win games, but they win the Internet.

Size Doesn’t Matter
The Packers play in a town of only 105,000 people yet they have the 4th largest social media following. Curiously, massive DMAs like Los Angeles and New York have some of the lowest follower counts — the Chargers, Rams and Jets all finished near the bottom.

Indy’s Getting Ghosted
The Indianapolis Colts were the only team with zero followers on Snapchat.

“The electric colors and the lightning bolt feel fresh. If I watched football, I’d want to see this team play with those powder blues.”

“The Falcons’ jerseys are uninspiring and clunky.”

“The rendering of the horse is perfect; elegant yet powerful. And orange and navy complement each other well.”

“Terrible missed opportunity. Nothing good to say about this logo. Pass.”

We graded each team’s site on copy, content, stickiness, engageability, photography, design and overall user experience. An interesting thing we noticed was that every team uses the same standard template. Some did a great job of customizing that template, others did very little to better the league boilerplate.

Best website: Buffalo Bills
The Bills had the standalone highest score because of the effort they put into elevating the league’s basic site framework. The coolest feature was a page with downloadable “Video conference backgrounds” — a brilliant execution that uses cultural circumstances to the brand’s advantage.

Worst website: Chicago Bears
The Bears’ site needs a good shuffle. The content section of Chicago’s homepage is nothing but a haphazard dump of 60 articles. 60. All other teams had between 3 and 15 articles in their content section. This kind of overkill creates decision fatigue and makes nothing feel click-worthy.

The Miami Dolphins earned excellent marks. They upgraded the template with lots of customizations including animation, typefaces and beautiful, high resolution photography. The only reason they didn’t score higher was because there’s no Spanish on the site! Even New England has a “Mundo Patriota” section. (For reference, 69% of Miami-Dade County identifies as Hispanic or Latino; only 20% for Boston.)

Speaking of the Patriots, their site felt the most like a business. There were dedicated sections and videos for the team ownership, news about being awarded Germany as an “International Marketing Area” and lots of talk about strategy and personnel movement. (Note: This audit was done before Tom Brady’s retirement, the news of which overtook patriots.com.) 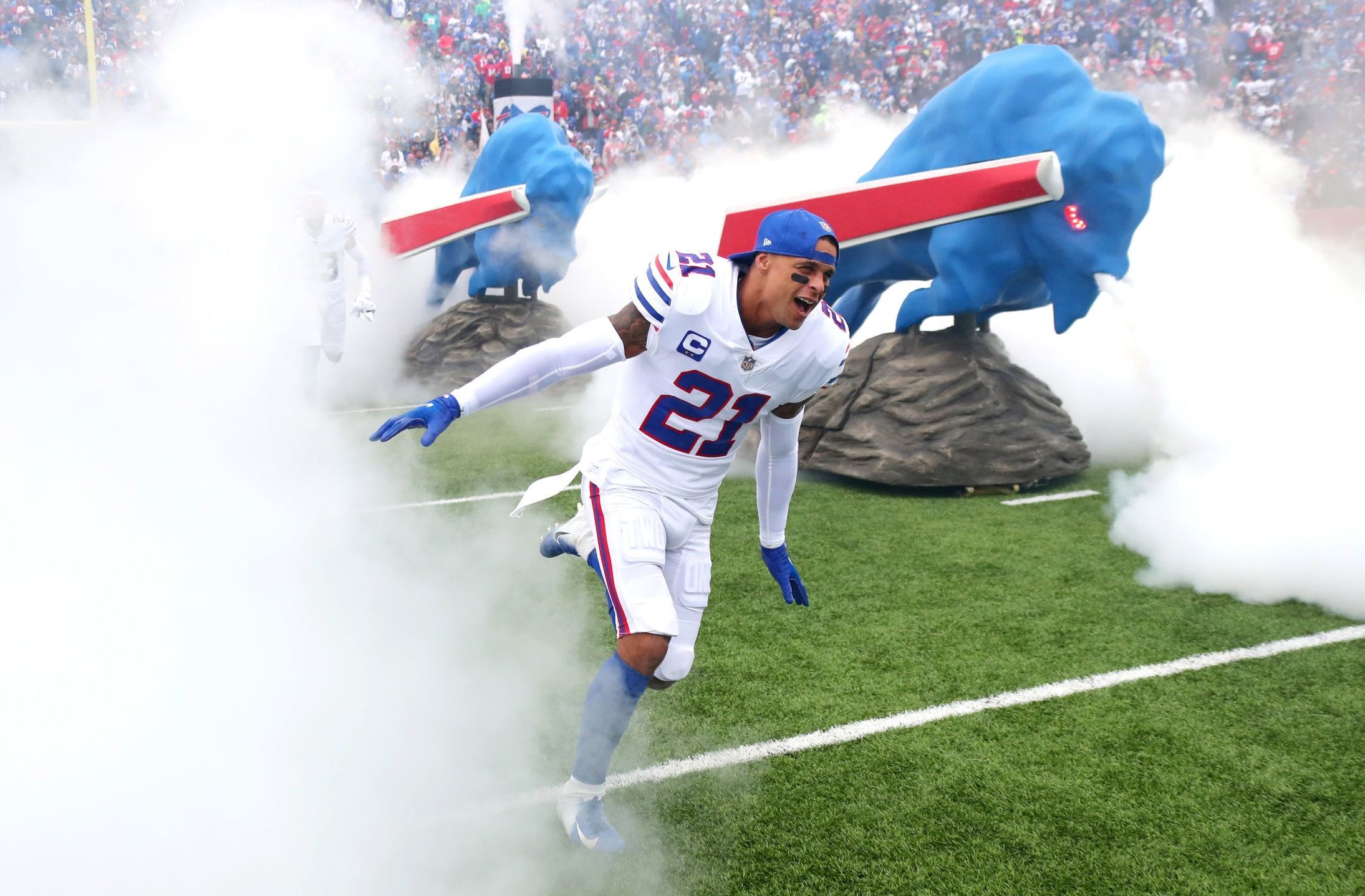 I had no hypothesis going into this. Curiosity was really the driver here. That, and the chance to combine two of my favorite things — sports and creative nerd content. As my team collected all of the data, a few key insights stood out.

1. Zig when others zag
This isn’t new advice, but it’s so easily forgotten it’s worth the reminder. Just because every other company in your industry is doing things a certain way doesn’t mean you have to, or should. Think about what is going to make your prospects connect with your particular brand. For the love of Vince Lombardi, do whatever you can to stand out.

2. Create, monitor, adjust, repeat
The one and only guess I had at the start of this project was that Washington would finish near the bottom. The franchise took 18 months to decide on a name and that indecisiveness carried through on the organization’s digital channels which were significantly lackluster. And not to pile on, but our data was proved right again when Fast Company called out the Commanders for poor branding execution (among other organizational missteps). Bottom line: When it comes to content, done is better than perfect.

3. Stretch your assets
It was reassuring to see that the teams that finished at the top of our rankings are generally already known for strong branding. The elite marketers in the league have gained loyal customers — sorry, fans — through a balanced, holistic approach. It isn’t enough to only have a good Instagram page or a solid blog program. Brands that win crank out consistent, quality content across multiple platforms.

4. Leverage your USP
The best product doesn’t always win but the best story often does. Teams at the top of the branding food chain do two things right: they hype up their marquee players and leverage their branding assets. For example, the Rams know how to tell Matt Stafford’s and Odell Beckham Jr.’s stories. The Bengals are smartly maximizing their Joe Burrow content. The Steelers have towels, the Packers are cheeseheads and Bills Mafia continues to crush tailgate parties.

Offseason or not, the strategies and insights we pulled from our audit would help take any team to the next level in branding and marketing effectiveness. Maybe we’ll do this again next season and see how things have changed?

These tactics of course don’t only apply to football teams — if your team needs a thorough marketing strategy based on data, reach out to us at marketing@methodcommunications.com. And enjoy the game this weekend! 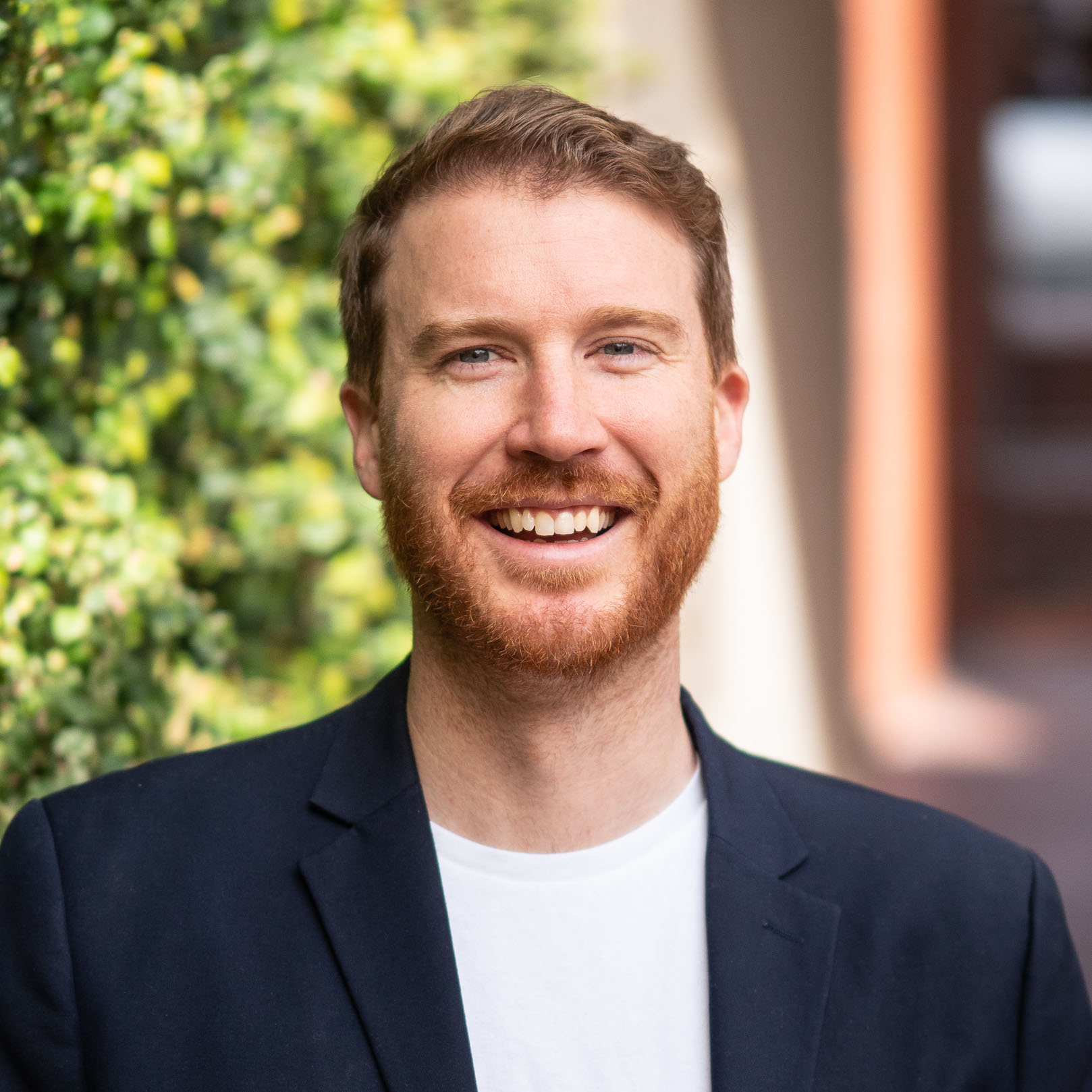 Aaron Gough is an Associate Creative Director with Method Communications.